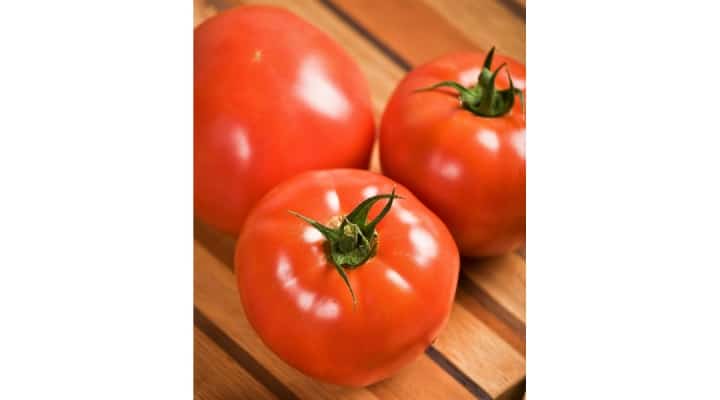 Celebrity tomatoes were named a Texas Superstar plant after decades of success around the state. They’re a great choice for any gardener. (Texas A&M AgriLife photo)

COLLEGE STATION, Texas — The Celebrity tomato, long recognized as the variety by which all new tomatoes are measured, was named the latest Texas Superstar plant.

Larry Stein, Ph.D., Texas A&M AgriLife Extension Service horticulturist, Uvalde, said Celebrity tomatoes have been the standard for new tomato varieties since their introduction more than 40 years ago and meet all the criteria for a Texas Superstar plant.

“Celebrity tomatoes have been around for a long time, and it is rare for a tomato to be as good as it has for as long as it has,” he said. “When we test new tomato varieties, we look for characteristics that are as good or better than Celebrity, and that is not easy to do.”

To be designated a Texas Superstar, a plant must perform well for growers throughout the state. Texas Superstars must also be easy to propagate, ensuring the plants are widely available and reasonably priced.

The Celebrity tomato was first hybridized and produced in the U.S. by Colen Wyatt. The seeds were commercially distributed in the late 1980s by Petoseed Co. and today by Seminis Vegetable Seeds.

In 1984, the plant was judged by various horticulture experts and recognized with an All-America Selections award due to its favorable characteristics compared to other tomato cultivars.

“For gardeners who plant tomatoes in the same spot year after year, they have to have root-knot nematode resistance,” he said. “That and its yield, fruit size and quality make Celebrity a must for gardeners.”

Celebrity tomatoes require full exposure to the sun for optimum production. They are also tolerant of a variety of soils as long as the location drains well.

Plants are perennial but grow as an annual in Texas due to the cold. They are determinant, or grow as a bush, but will easily reach 4-6 feet tall.

Celebrity tomatoes perform best as transplants in early spring, or they can be planted mid-summer for fall harvest, but whiteflies and viruses may hinder production. Plants also need staking or caging to produce fruit throughout the growing season.

“I would suggest them for spring planting because of the potential for whiteflies and the diseases they carry in the fall,” he said. “We also just suggest home gardeners cage them and not prune the plants. I also recommend gardeners replant starter plants in larger pots until they’ve developed a strong root system, and then transplant them to the garden.”

Continue fertilizing after the first fruit set, and the plant will continue to grow and set more fruit, he said.

Stein said to apply fungicide and insecticide when fruit are about golf ball size, but that tomatoes may reach harvest before sprays are needed.

“Stinkbugs and pinworms are the main culprits, and you’re likely to get tomatoes off by early spring before they become a problem,” he said.

Along with root-knot nematodes, they are resistant to several diseases that plague tomatoes, including fusarium wilt types 1 and 2, verticillium wilt and tobacco mosaic virus, Stein said. Root-knot resistance is significant because very few tomatoes are tolerant to that pest.

Fruit is also resistant to cracking and splitting when there is excess water and sugar movement as the fruit develops, Stein said.

Ripe Celebrity tomatoes are round and red, and vigorous plants typically produce 20 or more very plump, robust fruit, Stein said. Fruits typically weigh approximately 8 ounces and are 4 inches in diameter. Tomatoes continue to ripen after being picked and are typically harvested when they start to change color.

Celebrity tomatoes are listed on most nutritional lists as a superfood, Stein said. It is packed with the antioxidant vitamins A and C, potassium and B vitamins for heart health, and a carotenoid called lycopene.

“If you’re going to plant, you should have a few Celebrity plants in your garden and test the others,” Stein said. “If you’re new to gardening, Celebrity is a great variety to start with, and they are universally available throughout Texas.”