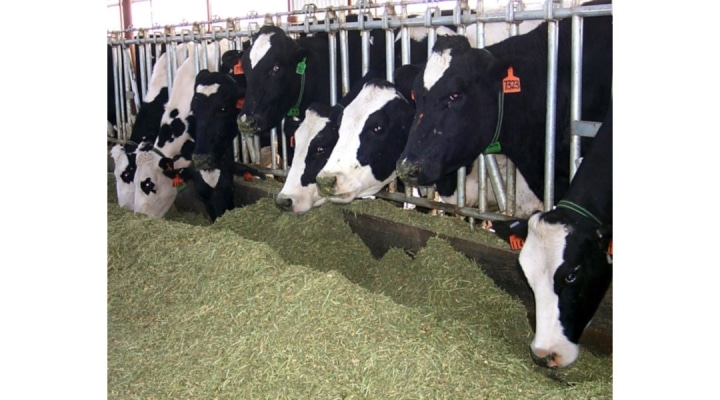 COLLEGE STATION, Texas — Wheat has long been grown on the Texas High Plains, but fewer producers are taking the crop to grain harvest, opting instead to cash in on diverse forage options for livestock producers, according to Texas A&M AgriLife Extension Service personnel.

Wheat offers more than one end use

Because of wheat’s flexibility, Bell said, it provides many producers an opportunity to harvest for grain or for forage based on markets or weather. With recent freezes, farmers in the southwestern Panhandle are beginning to chop many fields for both hay and silage.

“A wheat crop can be grazed, baled or cut as green chop or as wheatlage if it is not taken to the grain stage,” she said. “While grain harvest in the High Plains is typically in late May to early June, forage options allow the farmer to harvest their crop during April. In some cases, this might also allow the farmer to plant a summer crop.”

Bell explained wheatlage is the process of cutting and ensiling wheat as a silage crop to preserve forage quality. Wheatlage is generally chopped at the soft dough stage when the moisture is favorable for fermentation.

Green chop wheat is either fed directly or wilted in the field prior to ensiling. Green chopping optimizes forage quality because crude protein and digestibility are greater at earlier growth stages, she said, because green chop wheat is generally cut at the boot stage. At boot, the head is still enclosed in the flag leaf sheath, and the moisture content at this stage is approximately 80%.

“There is generally a significant reduction in yield when chopping at boot rather than at soft dough,” Bell said. “At soft dough, the early grain development as well as added biomass contributes to higher yields, although quality is reduced.”

Rick Auckerman, AgriLife Extension agriculture and natural resources agent in Deaf Smith County, reported that earlier-planted fields were at boot to heading at the time of the April 13 and April 17 freezes.

Auckerman said while it is still too early to fully assess injury, many producers are concerned about yield losses because temperatures were less than 28 degrees for 2 to 8 hours. He is already starting to see freeze-related injury including some cracking or splitting stems and enlarged internodes, but the heads are still looking good.

Fortunately, the injury is not as widespread as anticipated, he said. However, producers who are concerned about freeze injury are opting to take advantage of a strong forage market. Some wheat has already been swathed for hay, and silage chopping should begin in the next seven to 10 days.

In the northwest Panhandle, wheat acres for forage continue to increase in response to livestock demands.

“Although many producers are concerned about freeze-related yield reductions, a large percent of the wheat acres was already contracted for green chop or wheatlage,” said Mike Bragg, AgriLife Extension agriculture and natural resources agent in Dallam and Hartley counties.

Bell said producers are applying one more irrigation to preserve yield and quality on wheat that will be cut for forage due to dry conditions. It is also expected irrigation will continue on fields for grain production if the dry weather persists.

Because of the increased demand for green chop and wheatlage, Bell and Bragg initiated a wheatlage trial in 2018 at 3B farms in northwest Dallam County. Many producers were inquiring about yield penalties when wheat harvesting occurred at the boot stage rather than soft dough, so Texas A&M AgriLife data is helping producers decide how and when to market their forage.

Bell said the average yield for all evaluated varieties was 3 tons per acre on a dry matter basis at boot in comparison to an average of 7 tons per acres for the same varieties harvested at soft dough in the same field. While there was a yield reduction when harvesting at an earlier growth stage, data demonstrated that if quality is the goal, an earlier growth stage may be desired.

Bell and Bragg are repeating the trial during this production season.

“If the producer is not compensated for a reduction in yield when harvesting at boot, there is often a significant economic loss,” Bell said. “Knowledge of the yield loss may help the producer negotiate the price.”